What Do We Learn From "Dark Knight"? 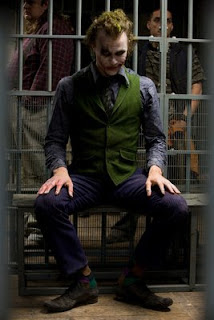 I'll let Margie Hack do the deep reflection on the movie for me. I think she is right on here:

In the movie, The Dark Knight, The Joker declares, “You know who people are in their last moments,” and I wondered who actor Heath Ledger was in the last moments of his life. When I saw him as the Joker on the set of The Dark Knight I looked with concern and wonder, knowing he was no longer alive, knowing that most think he committed suicide after the movie was filmed, although that can’t be proved – he died of a drug overdose, a toxic cocktail of pain and sleep medication. I watched him, trying to perceive, is this just acting or is this partly witness to the pain and darkness of his true beliefs in the meaninglessness of life as he pursues The Batman across Gotham City detonating everything in his wake?

At the end of the Dark Knight I was left in want of a hero large enough to make life meaningful again, someone who could bring light to the set, who could heal the lives ruined by injustice, crime, ambition, violence. The Batman, the faltering, finite hero we love, disappears into the night still determined to try to fix the world, but everyone, including him, knows how impossible and grievous this calling will be.

The movie underscores how hopeless this task for human heroes – to heal the earth of all its injustices, to offer choice even to The Jokers of the world. We wait for consummation, like Simeon the priest waited for the Consolation of Israel. Dostoevsky describes it perfectly in The Brothers Karamazov:

I believe like a child that suffering will be healed and made up for, that all the humiliating absurdity of human contradictions will vanish like a pitiful mirage, like the despicable fabrication of the impotent and infinitely small Euclidean mind of man, that in the world’s finale, at the moment of eternal harmony, something so precious will come to pass that it will suffice for all hearts, for the comforting of all resentments, for the atonement of all the crimes of humanity, of all the blood that they’ve shed; that it will make it not only possible to forgive but to justify all that has happened.