Together for Adoption 2011 - Bryan Loritts - Session 4 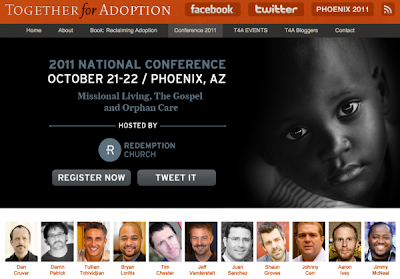 Right off the bat he noticed the clock in the back of the sanctuary and said, "A clock to a black man preaching is like kryptonite."  Funny. 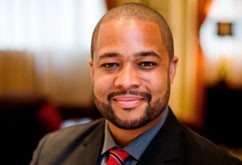 One of the ways that we do "on earth as it is in heaven" is to remember orphans and widows in their distress.

Have you ever thought of a black couple adopting a white baby?  Most have not.  Shows we have race issues.  We have to figure out how to get more minorities in the game when it comes to orphan care.  It is not happening very much.  Look at our the room we are in right now (filled with white people).  It is really good that we are all here.  And we need to become more diverse for the cause of the orphan.


“When the Son of Man comes in his glory, and all the angels with him, then he will sit on his glorious throne. Before him will be gathered all the nations, and he will separate people one from another as a shepherd separates the sheep from the goats. And he will place the sheep on his right, but the goats on the left. Then the King will say to those on his right, ‘Come, you who are blessed by my Father, inherit the kingdom prepared for you from the foundation of the world. For I was hungry and you gave me food, I was thirsty and you gave me drink, I was a stranger and you welcomed me, I was naked and you clothed me, I was sick and you visited me, I was in prison and you came to me.’ Then the righteous will answer him, saying, ‘Lord, when did we see you hungry and feed you, or thirsty and give you drink? And when did we see you a stranger and welcome you, or naked and clothe you? And when did we see you sick or in prison and visit you?’ And the King will answer them, ‘Truly, I say to you, as you did it to one of the least of these my brothers, you did it to me.’

“Then he will say to those on his left, ‘Depart from me, you cursed, into the eternal fire prepared for the devil and his angels. For I was hungry and you gave me no food, I was thirsty and you gave me no drink, I was a stranger and you did not welcome me, naked and you did not clothe me, sick and in prison and you did not visit me.’ Then they also will answer, saying, ‘Lord, when did we see you hungry or thirsty or a stranger or naked or sick or in prison, and did not minister to you?’ Then he will answer them, saying, ‘Truly, I say to you, as you did not do it to one of the least of these, you did not do it to me.’ And these will go away into eternal punishment, but the righteous into eternal life.”
(Matthew 25:31-46 ESV)

The issue of fatherlessness, abortion, and orphans is our 21st century issue of slavery.   No race owns these problems, however, we have to know our American history.  What slavery produced was a legacy of broken families.  The system of slavery was predicated on breeding and dividing families.  They put these people on an auction block!  Families were ripped apart.  This went on for generations and that is why the typical black person could trace their family history to broken families.  This is the history of black people in the United States.  This curse has to be broken.

If you transracially adopt don't be like Different Strokes.  Arnold and Willis were not introduced to their culture.  We don't put black culture first, our Christianity has to define us ultimately, we lead with that, but we can't dismiss culture of skin color either.  We have to acknowledge it and own it and deal with it.  Maybe your white family has to go to a black church?

How do I know I am saved?  Fruit.  God is changing us.  We are not who we once were.  Matthew 25 is not the root of salvation but it deals with the fruit of salvation.   Saved people don't HAVE to do Matt. 25 it is that we GET to do Matt. 25.  We don't sit on the grace of God, we give it away!

For any Christ follower who does not wrestle with the question of caring for the orphan or the least of these means you probably don't understand your salvation.  But adopting a ton of kids has zero to do with you being saved or achieving anything for you from God.

Materialism is so much a part of American culture that its like trying to explain water to a fish.

How do we leave margin in our budgets so that we can remember the poor.  Are we wrestling with the issue of contentment?  Enough is enough?  Even asking that question?  Don't get legalistic.  Don't make people in your image.  Your standards might not be other standards.

Labels: Together for Adoption 2011