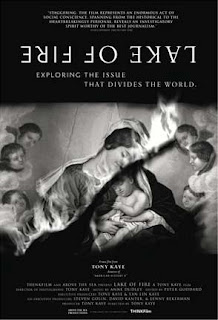 I love documentaries. They often have much more to offer intellectually than the mind-numbing titillation that Hollywood usually produces. The movie Lake of Fire certainly did not disappoint in this respect. This movie does not pull any punches and is very skillfully put together by director Tony Kaye (American History X). It is very hard to watch, but after having seen it I feel very strongly that it must be watched for two main reasons:

1. As a Christian, you will see how NOT to behave in the cultural discussion of abortion. The movie mainly paints a picture of Christians as backwoods fundamentalists who hold up huge signs and scream words of condemnation at abortion clinic doctors, workers and patients. It is very painful to watch these people do what they do. What I found most striking was the complete lack of gospel in their message. It’s all law. Obey or be severely punished. Law, law, law. This is true for all people. If you fail to meet God’s standard you will be punished eternally. But what is painfully absent (for the most part) in their message is the MEANS by which you can meet God’s standard, namely faith in Jesus Christ. Their message is pure legalism and is horrible to see in action.

It’s no wonder pregnant non-Christian women (or Christian women for that matter) don’t want to run to the church when this is what they perceive as the dominant voice of what it means to be pro-life. If you are a scared single mother, why would you run up to some angry guy with a huge poster of aborted babies and say, “Help me!”

2. You get to see abortion for what it really is. This was the most shocking part of the movie for me. You get to witness an abortion, twice. They hold nothing back. How anyone can watch those scenes and not seek to want to do something about the abortion industry is beyond me.

After watching I was left with a strong sense of the need to act. Obviously for all those who read this blog, you know how I feel about abortion, but our action needs to go beyond blog posts about Obama and his policies (as important as those posts are).

What if our churches were teeming with orphans that were given up for adoption or were formerly entrenched in the foster care system? What kind of a picture of compassion would that send to an on looking world? What if the norm in our culture was for churches to be known for their orphan care? If we are really pro-life, why don’t we rescue more kids? If this were the norm for Christians would this not potentially prove to be a viable and winsome option for single pregnant women? I can’t shake the connection between being pro-life and adoption.

Yes we still needs to fight for legislation that will outlaw abortion (and I will do that), but along with that, as Christians we need to fight just as hard to be a gospel-centered witness of compassion and care for those who are voiceless and helpless inside the womb and outside of it.

Watch Lake of Fire. You will be profoundly moved in a variety of ways. The last twenty minutes completely tore me apart.

If you have seen it, tell me what you think.

You can get it here on Netflix.

You can read reviews here on Rotten Tomatoes.

I was quite moved by the movie "Bella." Here was a guy who didn't just lecture/pressure/cajole/etc a young unwed mother to keep her baby or give it up to some stranger. Instead, he allowed his life to be drastically changed by becoming a real part of the solution.

I didn't know you were a documentary fan! Have you seen "Born Into Brothels"? If not, I *highly* recommend it. The "Seven Up" British film series is also great. It follows several people from childhood into adulthood, as a film is made, every seven years, which documents where they are at in their lives at that time. The most recent installment, "49 Up," is very moving.

I had the opportunity (privilege) to talk with an elder today about your adoption ministry proposal. He asked for my thoughts. I told him that I think it's a great idea! We'll see what God does!

Hi, found you through following some links. I'd like to comment on this question you posed, if I may:

"If this were the norm for Christians would this not potentially prove to be a viable and winsome option for single pregnant women? I can’t shake the connection between being pro-life and adoption."

As a woman who was once single and pregnant (and did indeed give my baby up for adoption), I think I can answer for you that, no, your scenario (the church adopting more children) would not make adoption a winsome option for me. Truly, there's nothing winsome about losing your child. Nothing.

The experience of relinquishment was so horrible, and the betrayal I felt after realizing the pro-life movement (which pushes adoption as a solution) didn't understand crap about the adoption "solution" they were encouraging, was pretty profound. I am now pro-choice (once staunchly pro-life) and if I were ever in the situation where I were pregnant and somehow literally couldn't care for another child, that pregnancy would be aborted. Period. There is no doubt in my mind it wouldn't be any worse than adoption has been.

I guess what I'm asking here is that before you start promoting something (adoption) as a solution, get to know it, understand it, figure it out. It's too huge and life-changing of a decision, to relinquish a baby, for people who've never done it and don't understand the possible repercussions to cavalierly suggest to women.

I'm having trouble following your logic. It would be preferable, for you, for your unborn child's life to be taken through abortion than for you to lose that child through adoption? Isn't this sort of thinking ultimately putting your desire to "hold on" to your child (by not losing him/her to adoption) above the child's life itself?

I hate that when I say I am pro-life, I get lumped in with the radical so-called "Christian" (I put this in quotes because, as a Christian, I see nothing Christ-like in their actions) pro-lifers who advocate the murder of abortion doctors and clinic bombings. How does that help unborn children in any way?